The Amazon app store for Android finally makes its official appearance and is currently live in the US market. As this post is written, there are more than 3500 applications for Android tablet and Android phones, ready to compete against few other third party app stores out there as well as against the official Android Marketplace which is now leading the market with more than 100 000 apps. 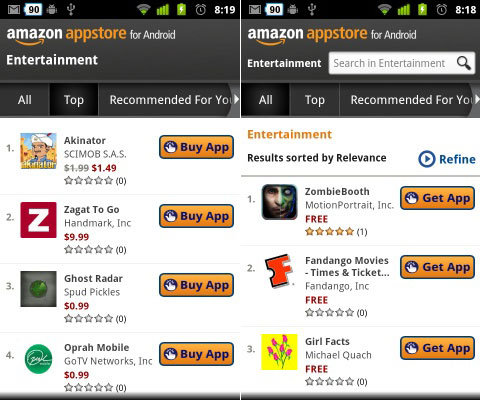 The Amazon app store can be accessed by either installing Amazon app store on Android devices or via web interface. The problem is, Google is not allowing Amazon app in the official Android marketplace, thus Amazon Store App will be considered as a third party unlicensed application.

The best thing about Amazon Android store is it offers a paid application for free within 24 hours time frame from its official launch. This allows us to grab Angry Birds Rio for free.

Anyway, here’s how to get Amazon Android Store App installed on your Android devices.

Should you try to access Amazon Android store from outside US, you need to use a US based VPN service in order to successfully browse through.

Step 1. Open your Android device settings and tap on “Applications”
Step 2. Make sure “Unknown Sources” is checked. If “Unknown sources” is already checked, move to step 4
Step 3. Click “OK” on the “Attention” dialog
Step 4. Go to http://amzn.to/getamazonappstore where it will be downloaded to your Android device
Step 5. Open the notifications and tap on “Amazon_Appstore.apk”
Step 6. Click “Install” and then click “Open”.

That’s it. Now you can login to Amazon Android Store with your Amazon ID and start enjoying both paid and free apps.

The author is the founder of eches.net. He was brought up and is currently living in a small town at the northernmost of Malaysia.

Kids can be difficult, and a great way to calm them down on rides home...More

Google is finally making the right move by starting to integrate all branches of Android...More

How to update Motorola Xoom to Honeycomb (Android 3.1) manually