The HTC Sensation marks HTC’s attempt to bring its flagship device to the level of excellence that Samsung has experienced in the past year. While HTC has been known to make some of the most desirable devices on the market and has a track record for quality products, in light of the Galaxy S and most recently the Galaxy S II, the company has fallen from the limelight thanks to the company’s South Korean rival.

The HTC Sensation is HTC’s attempt to not only challenge the idea of pixel dense screens, but dual-core processor phones as well. Does the phone deliver or does it fail? Read on to find out.

Sensational is not the word that comes to mind when describing the overall design of the Sensation. Don’t get us wrong, this is a solid phone, but the design does not stray far from HTC’s proven design esthetics. As stated before, HTC is noted for making solid hardware and seeing that so far it has been going well for the company, why should they mess with a good design?

That said, the first thing you will notice about the Sensation is the 4.3 inch screen that lines the face of the device. That screen is qHD and needless to say, it is aimed squarely at the Galaxy S, ATRIX and iPhone 4 devices. Does it deliver? We’ll cover more of that later.

Above the screen is your standard speaker as well as a front facing camera which is used for self-portraits and video conferencing. You also have your ambient and proximity sensors above the screen. Below the screen you will find your four touch sensitive Android buttons. From left to right they are Home, Menu, Back and Search. They do differ a bit from the layout of other Android phones such as the Galaxy S which begins with the Menu button and then follows with the Home button. Personally we didn’t have a problem with it.

On the rear of the device is an 8MP camera which also shoots 1080p content at 24fps. On the left side of the phone is the microUSB port as well as the volume rocker. On the top of the device is a power button to the right side and a 3.5mm audio jack to the left side.
Overall the device feels very sturdy and the build quality is on par with the top smartphones available today.

Specifications for the Sensation do read sensational. At the core of the device is a dual-core Qualcomm 1.2GHz Snapdragon processor. There is 768MB of RAM as well as 4GB of Internal Storage. Unfortunately only 1GB is user accessible so you will need to use that microSD card for extra storage. Thankfully the phone supports cards up to 32GB.

There is a standard 1520mAh Li-Ion battery, Bluetooth 3.0, Wi-Fi 80.11b/g/n and GPS/AGPS to boot.
The phones dimensions are minimal as well. Just 5 inches in length, 2.6 inches in width and 0.44 inches in thickness. The overall package weighs just 5.2 ounces with the battery in.

One of the most anticipated features of the Sensation is the qHD screen which HTC is planning to pit against that of Samsung’s Super AMOLED Plus screen. So what do we think of the screen? In one word it is an excellent display. If you were to compare this display to any other device, except the Galaxy S II, it would come out the winner. Not only are the viewing angles exceptional, but the 960 x 540 pixels which provide a 16:9 native screen ratio, perfect for movie viewing, is unbelievable. 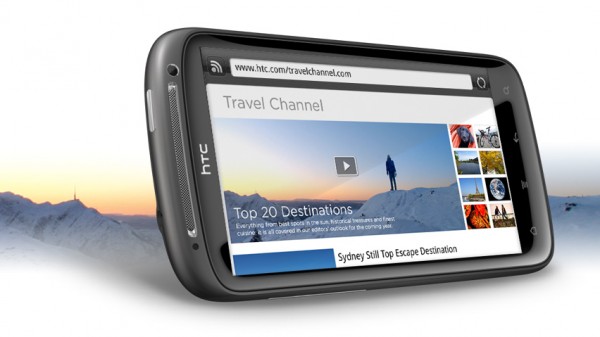 However, this device is meant to compete with the Galaxy S II and it is only fair that we compare them both. While the Sensation beats the GSII in pixel count (Samsung’s latest baby boasts 800 x 480), it still does not destroy the Samsung GSII in vibrancy. Yes, 35% more pixels are a great deal but unfortunately it does not translate into better direct sunlight viewing or overall viewing angles.

Don’t get us wrong though, the Sensation has a marvelous screen and in our tests we didn’t notice that big a problem with it overall. But when it came time to compare it to the Galaxy S II, Samsung edged it out. At any rate, you will be hard pressed to find another phone that can trump this, other than the previously mentioned Samsung device.

Performance on the Sensation is stellar as well. Thanks to the phones dual-core 1.2GHz processor, we had no problem playing 1080p content on the phone, shooting HD video on the phones camera which we might add is one of the better cameras we have seen on an HTC device. The only time we noticed some lag was when the phone played 1080p Flash content. That said, you might want to keep it in the 720p range. But everything else is great and overall performance is among the best we have seen.

Battery life is great as well. With moderate usage one can get two days charge out of the Sensation. However, with heavy usage that will drop down to a day’s charge.

Call quality is great as well. We won’t go on a limb and say it was the best we ever had, but it does provide solid quality and those using this phone should not notice any degradation in quality even when on speakerphone.

The Sensation runs Android Gingerbread that is atop HTC’s Sense UI which is in version 3.0. We won’t delve much into Android 3.0 but we will say that the improvements to Sense UI are great. HTC has been known to have one of the best Android skins and with version 3.0 they have solidified the fact that a customized Android experience can add to the overall Android experience.

Would we recommend the Sensation? In one word yes! In two words, consider Samsung. Again we will say that the Sensation is among the best smartphones we have tested, however, in light of the Galaxy S II, we would give Samsung the edge. But in the end, if you would rather use Sense UI rather than TouchWiz, go with the Sensation.

The author is the founder of eches.net. He was brought up and is currently living in a small town at the northernmost of Malaysia.

The Sony Ericsson Xperia arc comes as one of the latest additions to an increasingly...More

If you are wondering why the Nokia E7 looks so familiar, you have the Nokia...More

Last year is a wonderful time for HTC with the launch of powerful HTC EVO...More

Though many outstanding Android devices have been launched recently, the Samsung Nexus S is still...More